Amid life at the oasis: exploring undiscovered Morocco

“By Allah, this is a big day, a great day; when we have guests, it is a big day,” says Ali Satir as he looks up smiling from the charcoal brazier where he is brewing thick, black, sweet tea in a curved pewter teapot. Silence reigns for several minutes as he goes through the ritual of pouring the tea into the tiny glasses and back into the pot and then out again to make sure that it is mixed properly and that you get the correct amount of froth on the top. 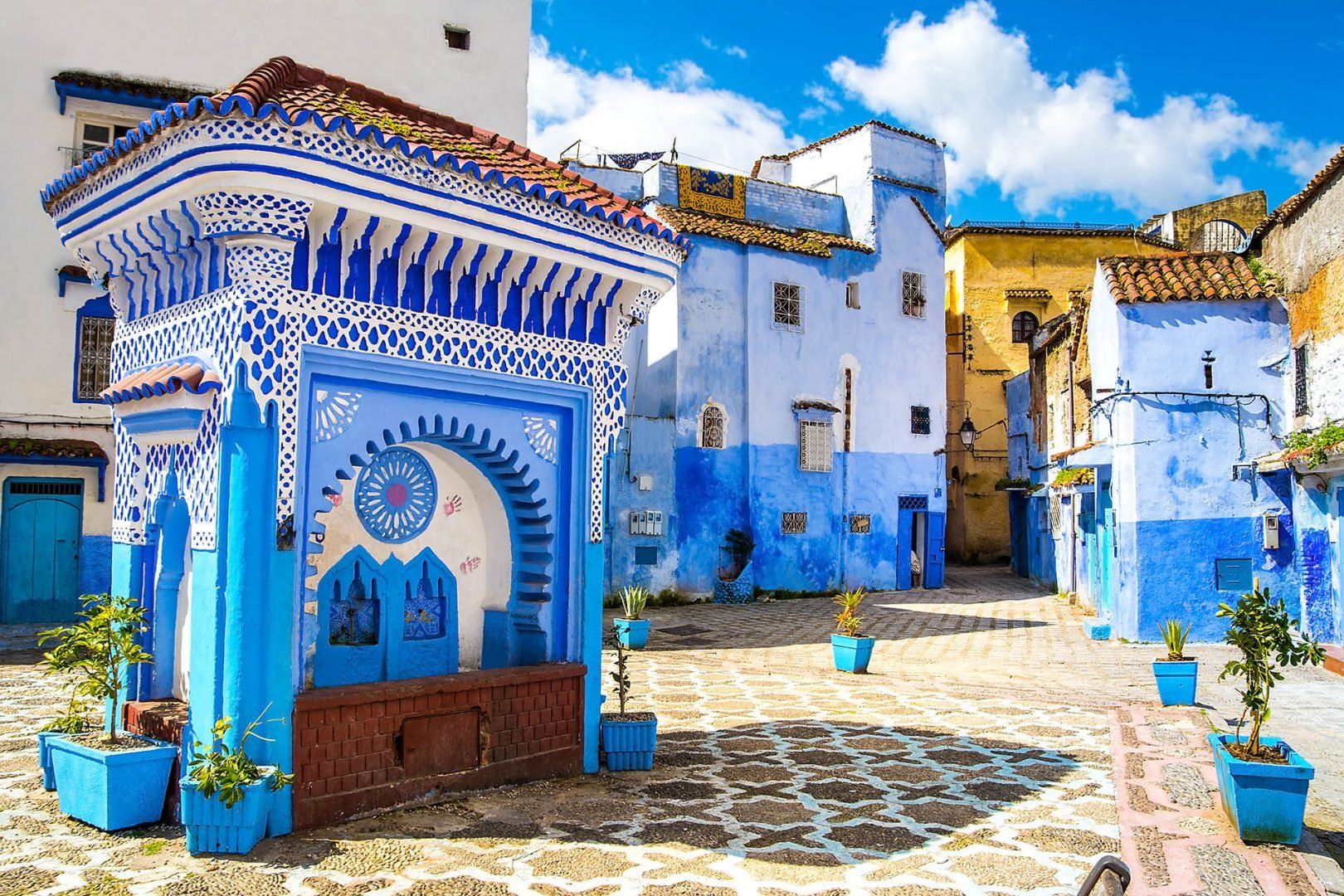 Then he hands it to me and the rest of the family and friends who are lying back on the brocade cushions in the salon munching dates and almonds. “In the name of Allah,” he says, and we all sip. I’m in Tighmert, an oasis on the fringes of the Sahara desert, at the end of the Anti-Atlas mountains. It’s so small that it isn’t even marked on my Michelin road map of Morocco. Seventeen kilometers long and between one and four wide, it stretches a brilliant green gash in the plain of barren sand, guarded by the jagged mountains surrounding it. I lived in Morocco for four years when an advert showing a small house to let in an oasis popped up on Facebook. I’d come to the country to run the infamous Marathon des Sables, six marathons across the desert in six days, carrying all my own food and equipment, and liked it so much that I stayed to pursue a life of adventure.

I loaded up my car, packing the bike, two cats, and plentiful supplies of Earl Grey and made the eight-hour drive down. My main base is the ancient walled city of Essaouira on the Atlantic ocean, with its blue sardine boats and stiff sea breezes that are cold in spring, so the thought of some desert warmth and the chance to explore a new region was irresistible. The landscape in Tighmert © Alice Morrison The route takes you through three distinct landscapes. It starts along the winding coast road with cliffs sliding into the foamy breakers and an endless expanse of blue. Then, after Agadir, you turn inland, across the plains, and up through the mountains. These are carpeted in purple and yellow wildflowers, in some places so thick that it looks like heather and gorse. It’s a main artery to the south and has the hairpin bends beloved of car advertisers, so getting stuck behind a convoy of trucks going at a snail’s pace is pretty much a given.

It leaves you more time to enjoy the gnarled shapes of the argan trees vying for architectural supremacy with the tall, spiky cartoon cacti and the squat, round shapes of the cousin de ma belle mère (mother-in-law’s cushion) cactus — some jokes are universal. Cross to the other side of the mountains, and everything changes. The desert stretches out as far as you can see and, if you time it to arrive at dusk, it glows pink. Turning into the oasis that first day, frazzled and hot and with two yowling cats, I felt like I had suddenly landed in paradise. The temperature dropped by 10 degrees; a soft breeze ruffled the tops of the date palms. Square vegetable gardens on each side of the dirt road were lined with olive and pomegranate trees. I had to stop the car to let a herd of sheep and black-and-white spotted goats cross the track, shepherded by a young girl who ran after them barefoot shouting, “Supp, supply.”

Traditionally built, low red-clay houses were scattered under the trees, with cerulean blue doors and white-surrounded windows covered in ornate iron grills. Goats at Tighmert oasis © Alice Morrison The people here are not Berbers or Arabs but Sahrawis, literally “people of the desert,” who have their own language and social code with hospitality at its core. As with every society, a delicate set of rules governs everything from marriage down to the use of water. Water is life and is husbanded carefully. The oasis exists thanks to a spring that bubbles up at the end of a long, shallow gorge and then makes its way underground and overground, helped by irrigation channels, to the furthest ends of the farmland. The main channels have tributaries off them, and iron gates and little stone dams block off these tributaries. Each farmer has an allotted time for his fields, typically once every 15 days, when he can open his gate and allow the water to flow into his crops. When his time is up, he closes his gate again, and the large tributary takes it to the next farm. 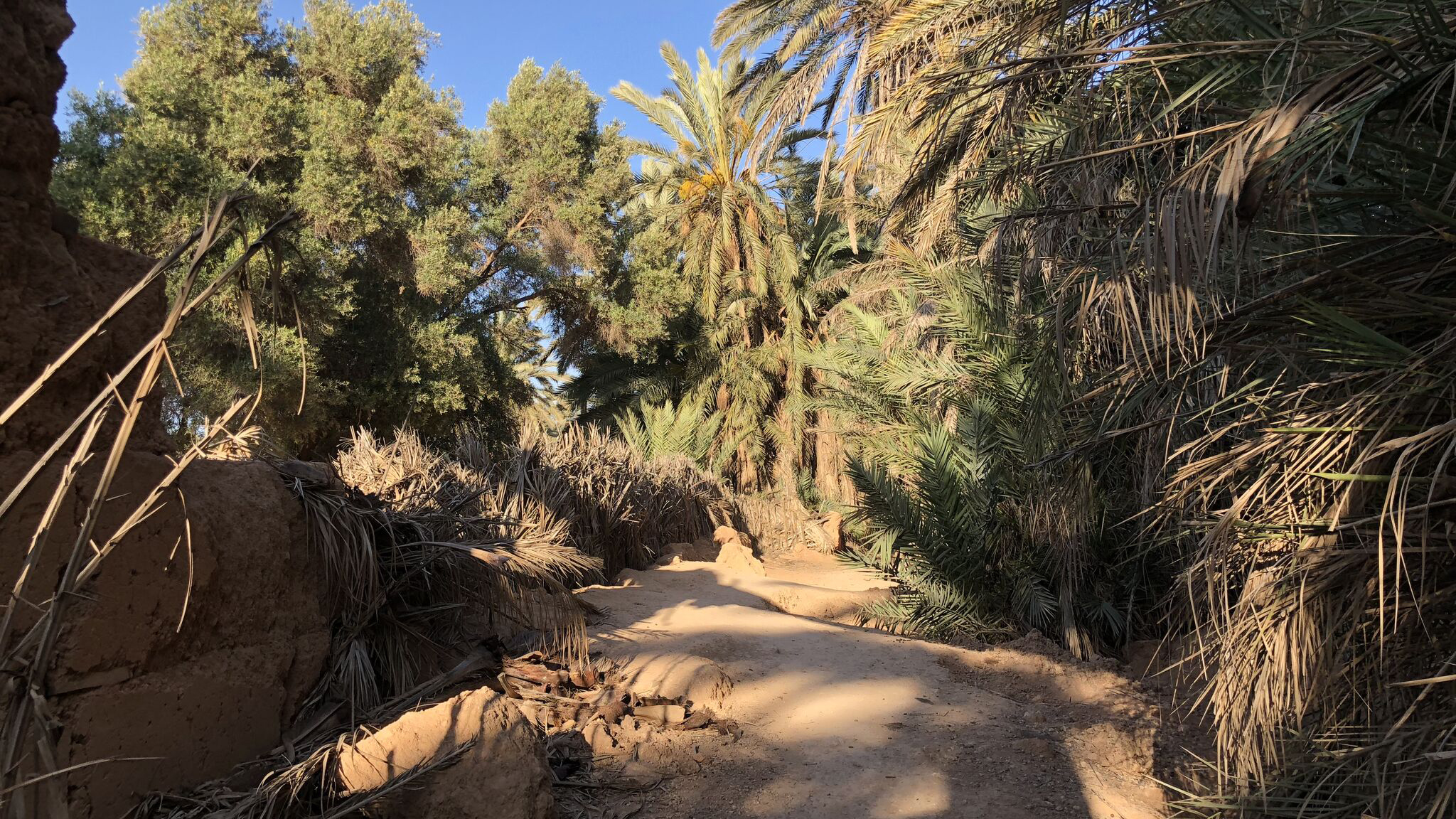 Marriage is equally carefully structured and is much on everyone’s mind. “Are you married?” was one of the first questions I was asked, and the question became a familiar one. When I answered no, there was much shaking of heads and encouragement: “Poor thing. Well, never mind, it’s not too late.” Marriages are a family affair and have a significant financial side. The bridegroom must pay the bride’s father an agreed amount that includes livestock — preferably camels — cash and at least 50 mullahs, which are the brightly colored lengths of material made from finely woven and dyed cotton worn by the women. In fact, some Sahrawi men prefer to marry Berber brides as their fathers are less demanding.

A doorway in Tighmert © Alice Morrison Then there is the matter of consent, which is handled very delicately, as I found out from Jamil Laabd-Abdou, who has opened a museum in a kasbah (fortified house) in the oasis. The kasbah used to be a ruin, and when he was a teenager, Abdou would go there to hang out, smoke, and listen to Supertramp’s “Breakfast in America.” He started by cleaning up a room to get comfortable and then slowly cleaned and repaired the rest, keeping the old tools and cooking utensils he found. Now he has a full working museum with a huge collection of artifacts, from camel saddles used by the nomads during migration to a water-clock that timed irrigation allowances to leg irons locked on to the slaves transported from West Africa across the Sahara and into servitude. He showed me a delicately painted leather bag.

“This is a marriage bag,” he said. “When a man is ready to marry and has chosen his wife, he takes his parents to meet her parents at their house. His mother brings along a bag like this one but unpainted. She leaves it at the entrance of the house when they come in. The families drink tea and eat and discuss everything. Meanwhile, the girl has come and collected the mother’s bag. If she likes the man, she will paint the bag and leave it at the door for the mother to collect and show she accepts his proposal. But, if she doesn’t like him, she will not paint the bag, which shows she refuses. Nobody has to have the shame of saying no.” It might be a long drive, but coming here offers a total escape from the country’s more touristed corners, Marrakesh chief among them.

Accommodation in the oasis is not five-star, but there are comfortable and clean places to stay. Villa Boujouf is set in a walled garden, with rooms arranged around a courtyard and ornately tiled bathrooms; Maison Nomades is simpler still but has a warm welcome, a garden full of fig trees, and an atmospheric roof terrace from which to watch the stars. Those searching for more luxury could top and tail their oasis visit with stays in southern Morocco’s desert kasbah hotels (see panel below). 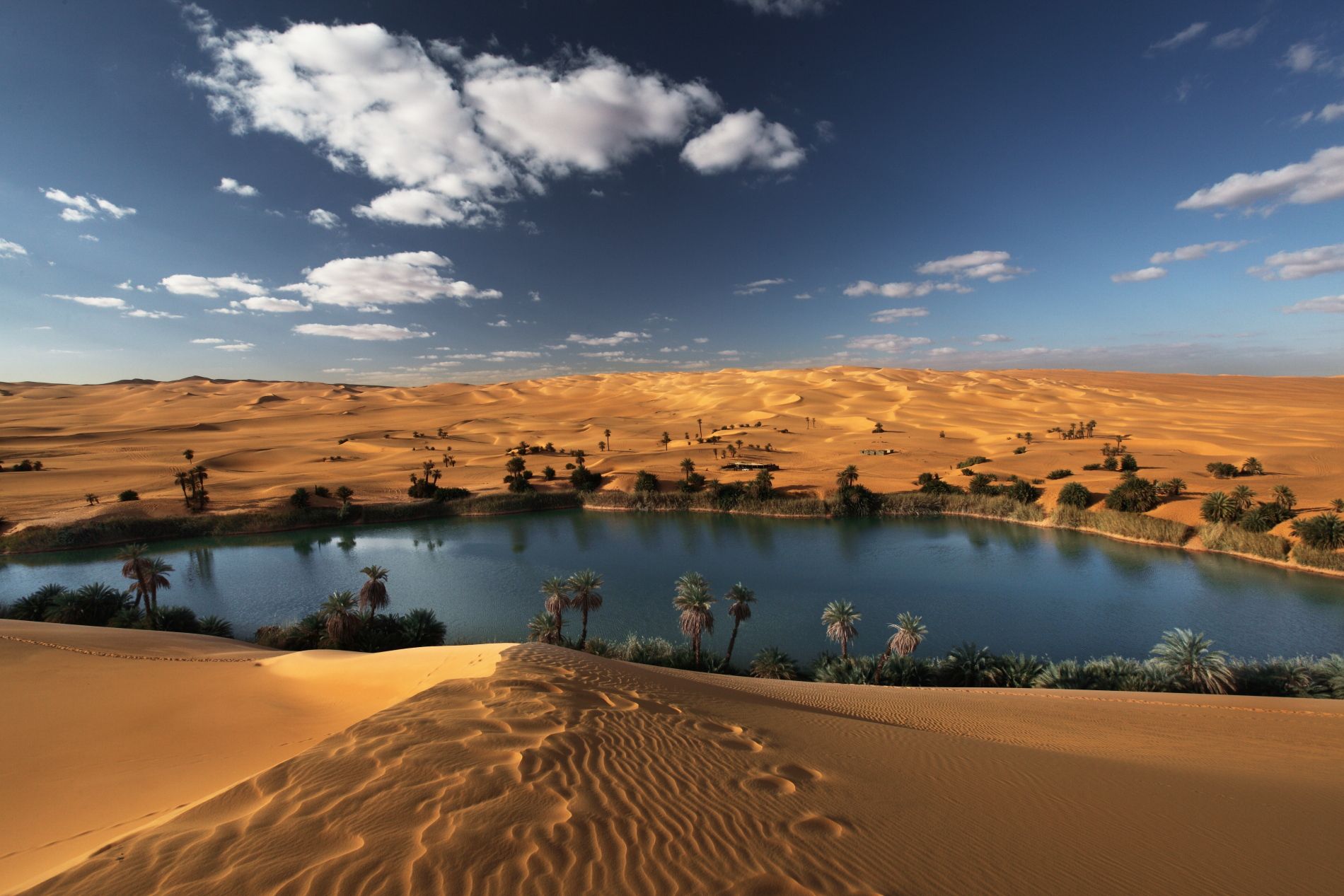 Wandering through the oasis could happily occupy a couple of days. Still, with more time, you could go fossil hunting with Abdou, strike out for a swim in the hot springs at Flask, or visit the ancient fortresses and granaries at Amtouddi, set high on rock outcrops, so they look a little like huge ships run aground in the desert. Basic vegetables, eggs, and goat’s milk can all be bought in the oasis, but for the weekly shop, I head to the town of Guelmim, a 20-minute drive away. For centuries, it has been a trading center situated on a crossroads between the Sahara and the coast. It is here that merchants would buy their beasts for the long journey south across the desert in caravans that could number up to a thousand camels, and the market grew to be one of the busiest in North Africa. On a recent Saturday visit, I wandered through the market’s three parts: livestock, fruit and vegetables, and everything else. The livestock market was held in a big open square, entered via an impressive arched gate. Goats and sheep dominated the center, with the camels in a far corner. An arc of motorbike trucks, ready to carry away purchases, formed a natural barrier. Inside it, buyers were dressed in the bright blue robes of the region, embroidered with gold, and wore black scarves wrapped around their heads in a turban, with the lower part drawn across their face like a veil. They were high-cheekboned, with hawk noses and dark eyes, accentuated by the black kohl that lines them and is believed to keep the eyes healthy.

There were almost no women in this part of the market. Women in a palm grove in Tighmert © Alamy, I strolled to the camel area, where about 20 animals were roaming around. These days, they are sold mainly for their meat, which is very lean and tastes like a cross between beef and venison. I got chatting to one of the sellers, who told me they had sold around 50 already; it had been a good day. I took a fancy to a white camel at the front of the group that had exceptionally long eyelashes. “You have chosen well,” my new friend told me. “The white ones always go at the head of the caravan because they can smell the water and are very valuable.” Up in the vegetable market, it was a woman’s domain and a cacophony of color.

Vivid piles of oranges and carrots, shiny black olives, green artichokes, and creamy cauliflower were interspersed with the women in their fluttering milfahs testing the vegetables and exclaiming over the prices. Everything comes from the surrounding countryside and has been picked the day before. Stallholders were assiduously trimming the tops off carrots and plucking the flowers from the end of the courgettes. When I brushed past the herb stall, the smell of mint, coriander, and thyme enveloped me. As I filled my bag with the basics, I drew a small crowd, eager to talk to the foreigner. I received several earnest invitations to lunch, and selfies were taken. I was turning to go when I was called back sternly. “Wait, wait, you haven’t had your tea yet!”

On a Knife Edge: The Life of a Young Lakota Warrior